The Carnival is Coming to Town !!! The Upper Makefield Fire Company will be hosting it’s annual Carnival starting Monday May 7th through Saturday May 12th with Jim Houghton Enterprises.  The Carnival will be open nightly from 6pm to 10pm and on Saturday from 2pm to 10pm.  Every Day is “Family Day” .. Ride all the rides for one low price.
Visit http://wwwjimhaughtonenterprises.com  The carnival is located on Rt 32 just south of Rt 532 across from the Washington Crossing Post Office.  For more information email Postmaster@umfc.org

The Upper Makefield Fire Company would like to thank the following businesses, with out their Donations the carnival would not be as successful as it is.

Bucks County’s Youngest Fire Company, the Upper Makefield Fire Company, held its annual Recognition and Awards Banquet on Saturday March 31st, 2012 at the Cock ‘n Bull Restaurant in Peddlers Village, Lahaska.  The Fire Company was chartered in 1967 and celebrated its 45th birthday this past December.  This year’s banquet was attended by 109 volunteer members and invited guests who enjoyed a good meal, awards program and dancing.

President Chris Muth conveyed the 2011 President’s Award to Kate & Robert Kay Sr. for the work that they did for the Company during 2011 while working on the Santa Committee, Banquet Committee and helping out with other various tasks assigned by the Executive Committee.

The Chiefs Award is given to someone who has been a great help to the Chief.  They are often asked to do things other don’t want to do.  They take leadership roles, serving as a mentor to others.  Chief Tim Brewer conveyed the 2011 Chief’s award to Mike Alessi for his work as Chief during 2011.

The Firefighter of the Year award is presented to the Firefighter who goes above and beyond his/her duties during the year.  Secrecy is a must for all awards and especially this award.  This year the Firefighter of the Year Award was presented to someone who represents the “real” firefighter.  Today the demands of a firefighter are much greater.  Not only must they have 194 hours of basic fire training, but should have EMT training which is 220 hours, and many in house training hours.  They attend monthly meetings, mentor new members and help with fund raising.  They also have a personal life.  They have a family, a full time job and try to have a social life.   All this is done as a volunteer. No one is paid to be a firefighter here in Upper Makefield. They only get our sincere appreciation and sometimes are recognized for their selfless service by being awarded the Firefighter of the Year Award.  Our heartfelt thanks and gratitude for being a “real” firefighter, the 2012 award goes to Dennis DeSantis, Battalion 81. 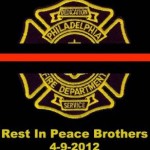 The Officer’s and Members of UMFC offer our deepest sympathies to our brothers in the Philadelphia Fire Department who died in the Line of Duty this morning … May they rest in peace.

Lt. Robert Neary and FF Daniel Sweeney, assigned to Ladder 10 on the C platoon, died in the line of duty in the early morning hours of Monday, April 9th while battling a 5-alarm warehouse inferno in the Kensington section of Philadelphia.

Lt. Robert Neary had 38 years with the department. He had been a Lieutenant since 1983. He was awarded four unit citations in his career. Before joining the fire department, he was a Philadelphia Police officer for three years and served as an Army reservist for 10 years, attaining the rank of Sergeant 1st Class. Lt. Robert Neary leaves behind his wife, Diane, and their three children.

Firefighter Daniel Sweeney followed in the footsteps of his father, Captain David Sweeney (Ret.), and joined the Philadelphia Fire Department in July of 2006. He had been stationed at Ladder 10 since 2007. Daniel was awarded two unit citations in his career.  Daniel was also a Part-time Paramedic in Bucks County.  He was the loving son of his parents, David and Marian Sweeney

Please keep all of our fallen and injured brothers and their families in your thoughts and prayers. We will update you further as more details emerge. We thank you for your compassion and support during this difficult time. 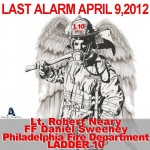 The Upper Makefield Fire Company dedicated the Swift Water room to the Memory of Jack & Doris Kennedy.  Jack & Doris were huge supporters of the Fire Company in the early years.  Their tireless work to help raise monies for the Fire Company through their efforts with the Welcome Wagon Auctions were not un-noticed.  One of the final Auctions Jack & Doris were involved in helped with the purchase of the Ice Rescue Sled which started our journey in the Marine Rescue Field.  It is only fitting that the Swift Water Room be Dedicated in their Memory.

Bucks County’s youngest Fire Company, the Upper Makefield Fire Company, held its annual Recognition and Awards Banquet on Saturday April 16th, 2011 at the Cock ‘n Bull Restaurant in Peddlers Village, Lahaska.  The Fire Company was chartered in 1967 and celebrated its 44th birthday this past December.  This year’s banquet was attended by 90 volunteer members and invited guests who enjoyed a good meal, awards program and dancing.

President Chris Muth conveyed the 2010 President’s Award to Marc Durant for his legal guidance and other significant contributions serving on the Fire Company’s Executive Committee.

The Top Trainer Award is presented to the Firefighter who completes the most training hours during the year.  During 2010, Grant McNinch attended 188 training hours and received this year’s award.

Tim Brewer conveyed the 2010 Chief’s award to Mike Alessi for his work as Deputy Chief during 2010.  Mr. Alessi was elected Chief of the department for 2011.

The Firefighter of the Year award is presented to the Firefighter who goes above and beyond his/her duties during the year.  Secrecy is a must for all awards and especially this award.  Ironically the recipient was also the emcee for the evening. The 2010 award was presented to Robert Kay Sr. for his service in 2010 and his 19 years of service as an Officer of the Upper Makefield Fire Company.

The final surprise of the evening was honoring the longest serving Chief of the Upper Makefield Fire Company, Tim Brewer. Tim has served as an Officer for 23 years, 18 of which he served as the Chief.  He is currently serving as Deputy Chief. Tim was presented with a hand drawn lithograph of the fireman’s prayer, Upper Makefield Fire Company Style.

On Sunday December 4th, 2011 the UMFC Marine Unit participated with the Washington Crossing Friends Group and The PHMC in their annual Crossing Boat Drill.  The UMFC Marine Crew member was asked to be a victim so the Revolutionary Re-Enactors could practice their “man overboard” procedures.