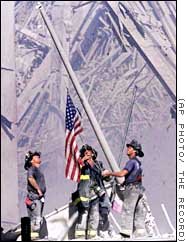 After the tragedy of September 11, 2001 the members of UMFC felt they needed to do something for their 343 lost brothers.  They knew going up to New York was not the right thing to do so the firefighters here went out and solicited donations from the community and raised monies for the FDNY Widows and Children’s Fund.  Over the next couple of months, UMFC raised $15,500.  With the help of FDNY Brooklyn Chief Dispatcher Mike Fox and Brooklyn Dispatcher #120 Warren Fuchs on Sunday March 3rd, 2002 approx 50 members of UMFC took a trip to Brooklyn to deliver their gift.  The charter bus first went to the quarters of Engine 280 and Truck 132 on the snowy morning but the Captain had been detailed to a different station.  Everyone back on the bus and onto Cortelyou Rd and the quarters of Engine 281 and Truck 147.  When we arrived, they were expecting us.  The members of Rescue 2 arrived along with representatives from the 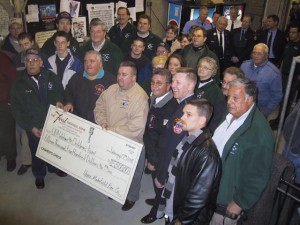 Firefighters Union and Battalion Chief 41.  There was a nice little ceremony and they prepared a nice little lunch for us that was very unexpected.  That morning there was a Firefighter coming off-duty that offered to take the bus down to ground zero so we could pay our respects.  Firefighter Tony Srour became a friend of UMFC that morning and has been a a good friend every since.  Its a shame such a tragedy had to occur to bring a good friend into our company.  Firefighter Srour took the UMFC members down to “Ten House” where we were lucky enough to meet Deputy Assistant Chief Joseph Pfeifer, the only surviving Chief from the command post inside the Twin Towers.  After seeing the extreme damage, even 6 months later, it was still a very moving a somber experience.  UMFC took the charter bus back to Upper Makefield with the memories of the day and the new friendships formed.  In the months and years to come these friendships would become stronger.  The day UMFC visited New York we did not use our lunch & dinner monies because of the meal provided by “Da Pride A Brooklyn”, so we donated that money to their house fund so they could rebuild the house watch area.  UMFC also sent a couple members to a Plaque Dedication at Engine 281 / Truck 147 for Captain Timothy Stackpole who was a firefighter at this station prior to getting promoted to Truck 103, Captain James Corrigan who was a firefighter at this station before getting promoted to Truck 10 and Firefighter Mark Whitford before their untimely deaths on 9/11/01.  Firefighter Srour has also come down here and participated in a couple or our events and regularly attends our annual Banquet.  Currently in the “Saxton Room” there is a wall dedicated to the events of September 11, 2001.  UMFC has been given numerous items related to September 11th from different people that have all been displayed on the one wall.