After reviewing three competitive bids, The Upper Makefield Fire Company has placed an order with Rosenbauer Corporation USA, the global leader in fire apparatus manufacturing, for a new combination “Rescue/Engine” fire truck.  The new “Rescue 71” will be replacing an over twenty-two year old existing Rescue-Engine. Chief Tim Brewer states “The new Rescue 71 will be able to leverage new technology that is vital for removing victims from serious car wrecks. It will  carry state of the art rescue tools that will help us to more quickly and efficiently cut through the hardened metals that are so prevalent now on all modern cars. The truck will also be capable of providing advanced fire fighting capabilities for the residents of Upper Makefield Township. We see this as an opportunity to combine functionality into one new piece of equipment and then we will be able to redeploy equipment between our two stations so that all residents will now have best equipment responding to their homes.Signing the contract on Monday, January 5th at Station 71 are Chief Tim Brewer, Vice President Rich Wathey, President Bart Krauss, Treasurer Jim Barry and standing is Mark Kramer of Rosenbauer along with Truck Committee Chairman and Battalion Chief  Paul Dollings. 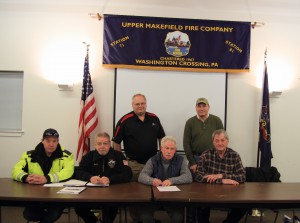