** UPDATE: Thanks to the generosity of our Community .. Over $1000 was raised during this event 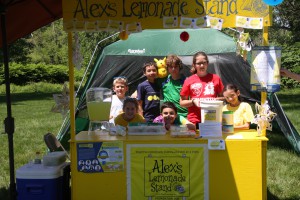 In an effort to join the battle against childhood cancer, the Upper Makefield Fire Company and the Glazer family will host an Alex’s Lemonade Stand during the Alex’s Lemonade Days on June 13, 2015 from 10:00 am – 4:00 pm at the Upper Makefield Fire House, 1221 Taylorsville Road, Washington Crossing, PA 18977. The Glazer kids decided to hold a lemonade stand because they wanted to help find the cure for cancer. Ethan Glazer wanted to get the firehouse involved because, “cancer is like a fire that spreads throughout the body. We thought that since you (the firemen) put out fires, we could help out the cancer fire.”

Ethan and Elora will be passing out lemonade, cupcakes and gluten free cupcakes. All they ask for in return is for a donation for Alex’s Lemonade Stand Foundation. “Our goal is to raise $300 to donate to Alex’s” as quoted by 9 year-old Elora Glazer, “but we would be happy to donate more!”